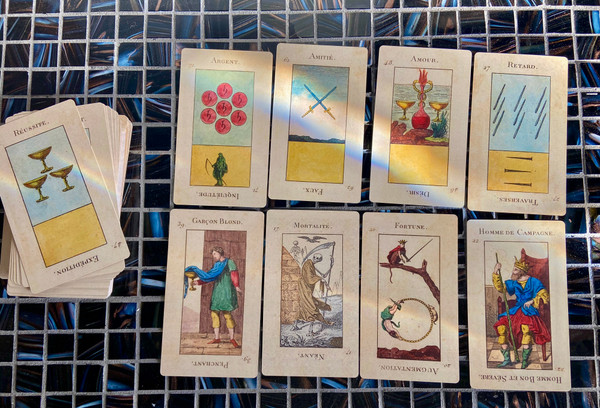 The Grand Etteilla Tarot Deck was first produced in Paris in the 18th century by "Etteilla", the pseudonym of Jean-Baptiste Alliette (28 August 1738 – 12 December 1791). He was the first French occultist to popularize tarot divination to a wide audience, and therefore the first professional tarot occultist known to history who made his living by card divination. Etteilla published his ideas of the correspondences between the tarot, astrology, and the four classical elements and four humors, and was the first to issue a revised tarot deck specifically designed for occult purposes .

This deck is comprised of 78 cards: the normal 22 major arcana and 56 minor arcana (with french names). Along with the deck, we'll include a cloth bag to store the cards in and a list of translations to help you familiarize yourself with the french terms.

***NOTE***
This is a facsimile reproduction printed from an original from the 1700's.