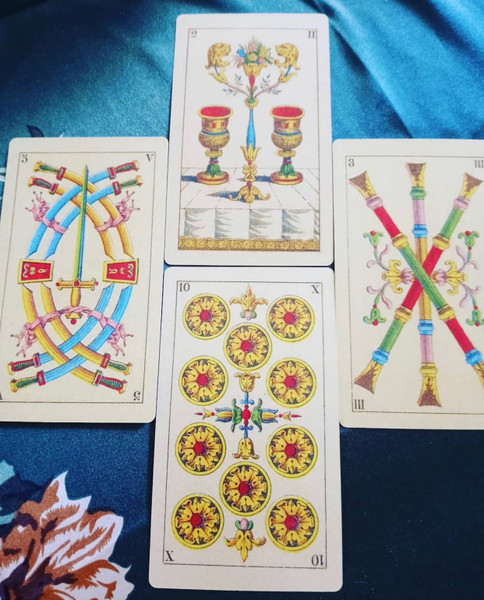 The Tarot Della Rocca style was born in 1835 when the Milanese printer Ferdinand Gumppenberg commissioned a deck from the artist/engraver Carlo Dellarocca. As the most elegant and refined Italian deck of its time, it quickly became known as i tarocchi sopraffini, the super-fine tarot. This reproduction represents the cards as they were at the time with minor enhancement to bring the cards colors back to their former glory (in accounting for the fading over the centuries).

This deck is in the Marseille style, so it contains the standard 78 cards that we have become accustomed to in modern tarot.


Along with the deck, I will provide a burlap tarot storage bag and a brief guide to the meanings of the cards as well as their translations from Italian to English.

Some specific elements of this deck and its imagery that set it apart from other Marseille style decks.

• The Bagatto (representing the magician) is a cobbler standing in front of a work table strewn with the tools of his trade. There’s a jug on the table and the cobbler hoists a large glass of wine.
• The Lover stands between his sweetheart and a king who rests his hand on his shoulder. The young man’s clothing announces his divided loyalties. He wears tights and pouffy pants, but also a helmet and armored corselet. He seems to be torn between love and duty – following Cupid’s call or the demands of his king, who may also be his father.
• Justice’s body is tilted slightly, as is her sword and scales. She has an eye in the center of her collar.
• The Hermit carries a little open flame in a holder instead of a lantern.
• The Strength card is more dynamic than the traditional Tarot de Marseilles image. The woman straddles the lion with a fierce expression on her face. One of her bare feet presses down on the lion’s back. The lion’s front leg is raised and he is resisting her efforts to pry his jaws open.
• The skeleton on the Death card is sweeping up symbols of human pride and vanity like jewelry, a bishop’s miter, books, artist’s palette, weapons, and medals. The card is labeled Il Tredici (Thirteen) to avoid using the word Death.
• The Devil card has several symbols commonly associated with him: the trident, ass’s ears, snaky hair, a furry skirt, clawed feet, monsters and hell fire.
• The Moon retains the towers and dogs from the TdM, but the scene is an estuary and one of the towers is a lighthouse. The dogs seem to be in a walled garden, and a boiled lobster rests on a large silver platter on the ground.
• On the Sun card, a carefree young couple dances in a walled garden under a bright sun that is burning away the last of the clouds.